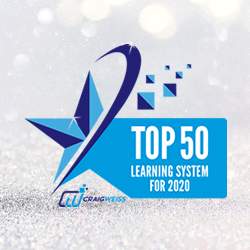 Craig Weiss, CEO and Lead Analyst of The Craig Weiss Group, which provides analyst, advisory and consulting services to buyers and vendors in the industry, annually announces Top 50 Learning Systems for the year. The list for 2020, which was made public on 12th January, features UpsideLMS, an AI-powered, Cloud-based Learning Management System.

The final top 50 list, which was whittled down from the initial list of 1000 vendors around the world was based on:

Elaborating on the criteria, Craig said, “As in the past, I weighted numerous components in a system, with some being higher in weight than others. I also placed vendors into various categories, based on their top three verticals, target audience size, type of system and customer-base – however, there was no impact in terms of data calculation Finally, support, training and technical were each individually computed, with support being weighted higher than the other two, but each still receiving data points based on a trend line that I calculated for the industry.”

UpsideLMS, which features on #48 on the list, ticks all the boxes with its AI-powered Recommendation Engine, an intuitive interface for Learners and Admins alike, Free 365x24x7 Tech Support, a comprehensive feature set including but not limited to Gamification, Social Learning, Mobile Learning (in the form of iOS and Android Apps), Reporting and Analytics.

Craig Weiss is the CEO and lead analyst for The Craig Weiss Group, which provides analyst, advisory and consulting services to buyers and vendors in the industry. Craig has been identified as one of the most influential people in the world for e-learning and the most influential person in the world for learning systems. Craig writes the Craig Weiss blog, which is read weekly in 174 countries, territories and colonial territories. Since he launched the blog in late 2009, his forecasts and projections on e-learning has been over 90% accurate. Craig’s experience in the corporate world as a training director/manager overseeing divisions and departments which included developing and implementing e-learning programs and the finding and selection of LMSs, makes him uniquely qualified in the analyst and consulting industry. He has worked in multiple verticals including healthcare, non-profit, association, retail and hospitality, aerospace/defense, financial services and technology.