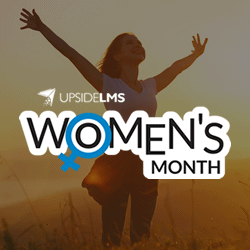 UpsideLMS celebrates all of March as ‘Women’s Month’

International Women's Day celebrated on the 8th of March every year is a focal point in the movement for women's rights. The 2020 theme ‘Generation Equality #EachForEqual’ underlines equality being not just a women’s issue, but a world issue where everyone needs to step up and take responsibility. UpsideLMS, a leading provider of learning technology solutions to blue chip organizations worldwide, that has been on the forefront of women empowerment and gender equality for its 80+ strong workforce is walking its talk with a month-long celebration of women at work called ‘Women’s Month’.

UpsideLMS’ Women’s Month will put women power in the spotlight through a series of activities that include:

Amit Gautam, CEO and Founder of UpsideLMS, says, “I have had women rule all aspects of my life – personal and professional - and in various capacities too. And while each one has been uniquely unique in her way, there has been a common theme across them all. It’s that of integrity, dedication and commitment. It’s a rare mix of EQ and IQ. Of empathy and steadfastness. The very qualities when looked from the employer’s lens, translate into productive, empowered women. Precisely what I have tried to tap into at UpsideLMS since its inception. This has been supported (and even crafted, to a large extent, for better alignment) by our hiring strategies, our workplace-policies and everything in between – maternity, adoption, transport, flexi-time, work from home, and more! It’s no surprise then that our women at the workplace ratio stands at ~40% with a fair representation across all functions.”

“Building gender diversity, equality, representation and inclusion is a team effort. And a moving target. A target we have set for ourselves and pride on achieving year-on-year as we hone our culture that promotes and celebrates female participation”, he adds.

To catch all the Women’s Month happenings, head over to UpsideLMS’ pages –