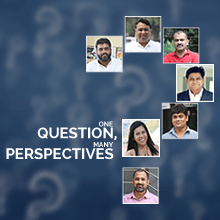 Organisations worldwide are undergoing a rapid change in their Learning and Development (L&D). Not just the function, but its working, the people, and its expectations are on the verge of or already in the process of transformation (or rather, disruption). What is needed then is a solid support system by people who have seen the tide change and can be the change agents for them.

UpsideLMS, a leading provider of a Cloud-based Learning Management System, has stepped in to be this very change agent by providing answers to some of the most pressing questions faced by L&D and HR professionals today through its video series called, 'One Question, Many Perspectives'.

"UpsideLMS leadership team members have a wealth of knowledge in LMS, Learning Management, and technology-enabled learning, in general. They are the eyes of the company and have their ears to the ground, as they are constantly in touch with the clients, the prospects, and the market. Further, each one of them has over 10 years of experience in his/her function, a bulk of which is in the eLearning domain. So who better to ask for answers than these?"

Launched in January 2018, the series comprises 6 episodes each of which is released in the 3rd week of every month and tackles a single question pertaining to learning-tech. UpsideLMS' leadership team members - Amit Gautam, Director - UpsideLMS, Amar Pawar, AVP - Technology, Sandeep Bhoyar, Head of Technology - Product, Vivek Garg, Sales Head, Rajesh Shintre, Head - Client Relationships, Ritesh Puranik, UX Designer, and Pranjalee Lahri, AVP - Marketing - share their individual perspective on the question. This is exactly what forms the base of the video series - analyzing 'one question' from 'different viewpoints' of the function heads - from Sales to Designing, Technology, and beyond!

'One Question, Many Perspectives' series is available for viewing on UpsideLMS' YouTube channel - http://bit.ly/2GqB6mO