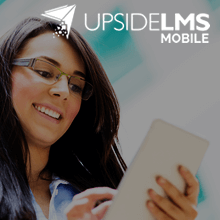 With 70% of on-the-go professionals estimated to take care of business on their personal mobile devices by the year 2018 (Gartner), the need for Mobile Learning has never been more evident than now. As an answer to organizations keen to adopt mLearning as a part of their corporate L&D strategy but unsure of a secured, scalable platform to do so, UpsideLMS has recently launched 'UpsideLMS Mobile', an Offline Mobile Learning app for iOS and Android.

The latest addition to UpsideLMS' robust learning solutions and products portfolio, 'UpsideLMS Mobile' enables learners to access training content in an offline mode, anytime and anywhere. This can be done by downloading the assigned training content in the form of Videos, Courses, and Reference Materials onto an Android smartphone or tablet, or an iPad or iPhone, when connected to the Internet, and viewing it (multiple times over too!) in a non-Internet-connected state too. UpsideLMS, a feature-rich and innovative Learning Management System, acts as the content management and delivery backend for UpsideLMS Mobile. A two-way synchronization between the UpsideLMS Mobile app and UpsideLMS ensures that all offline training activity is tracked, complete with syncing and updating of progress in the LMS (UpsideLMS), when back online.

"While we live in the age of G technologies, where 3G, 4G and even 5G have become a de facto expectation, Internet connectivity issues continue to be a reality. And when it's not the connectivity problem, it's the nature of the industry that demands a learning solution that works in offline mode too. UpsideLMS Mobile is an answer to these. With UpsideLMS as its backend and an app base, UpsideLMS Mobile will enable organisations to experience, deliver and manage Mobile Learning in its truest sense yet!"

Interested individuals can request for a demo of UpsideLMS Mobile here.