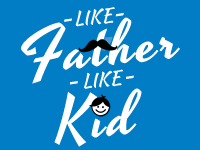 In a world that runs on technology, UpsideLMS, a leading Learning Management System, took an offbeat, off-tech path by commemorating all fathers in its team through a social media campaign, called 'Like Father, Like Kid'.

"Quoting Khalil Gibran, 'you are the bows from which your children as living arrows are sent forth'. As fathers, we need to give our children the right direction and the all the strength they need. To all the fathers from one - 'you guys rock and continue doing so'! All of you have made Upside Learning a great place to work. We are happy and proud to have you at UpsideLMS and making it a special part of your family. Thank you everyone and have a great Father's Day with your loving ones."

Hinged on the belief that everyone emulates and aspires to be like his/her dad (in ways more than one), the 'Like Father, Like Kid' campaign was conceived. A photo shoot was organised wherein all fathers were requested to match their dressing to their kid's/ kids'. The idea was to capture not just a picture but that invisible yet undeniable bond between a father and his child/ren. Kids as young as 5 months and old as 15 years, walked with pride into the UpsideLMS office, which doubled up as a photo studio for the day. In this seemingly wide spectrum, ran a common thread of innocence and sweetness, as kids went about doing what they do the best - being kids.