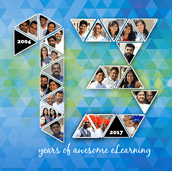 UpsideLMS celebrates 'its team' on its 13th Anniversary

With a strong belief that 'A company is as extraordinary as its people', UpsideLMS celebrates its 13th Anniversary today by commemorating its team members.

"Our 13-year journey would not have been possible without the untiring efforts and dedication of our team members. On our 13th Anniversary, I would like to thank each and everyone in the UpsideLMS team, both current and past, for believing in the product and making UpsideLMS what it is today."

Be it Product Development, Product Implementation, Customer Management, Project Management, Sales, Programming, Quality Assurance or Marketing, UpsideLMS is (and has been) driven by highly proficient and motivated individuals. Each team member, in his/her own way, has contributed to the success of the Best Value SaaS Learning Management System and has helped it carve a name for itself in the global LMS market.

Today, UpsideLMS stands tall with over 20 awards and recognitions (12 Brandon Hall Awards alone!), and trust of over 750,000 users and 90+ clients worldwide. Its AGILE development and designing methodology has given (and continues to give) the market new features and functionalities, including UI and UX enhancements. Its Free 24x7 Support, that is offered to all clients as a part of the LMS fee, is a boon for SMBs and Training Companies that cannot afford in-house LMS support teams. UpsideLMS pricing too plays a key role in providing 'Best Value' to its customers - optimally priced for a comprehensive set of features and secured Cloud Hosting, it offers more value per dollar.

As a way of saying 'Thank You!', UpsideLMS has planned a fun photo booth activity for its team and will be followed by a corporate annual party, which will be published on the product's social channels soon.

Wishes from our partner - Raj George from Malomatia,
Qatar

Wishes from our client - Jackie Stanley from DNA STREAM, Qatar

Wishes from our client - Peter Leyten from Procurement Academy, Belgium