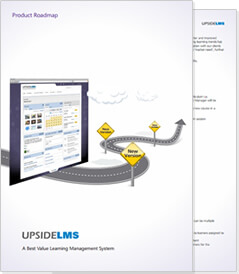 UpsideLMS Promises AVETMISS, Tin Can And SCORM 2004 Compliance In Its Upcoming Releases

We are an innovative and forward thinking company. It’s only natural that our products demonstrate the same philosophy and consistently attempt to address the needs of our customers as well solve the most difficult problems they face in managing learning. UpsideLMS product roadmap is an outcome of the constant R&D, our industry participation and most importantly ‒ our ability to listen to our customers.

Upside Learning’s UpsideLMS team has planned a number of new developments and improvements to its multi award‒winning Learning Management System. These developments, which are in line with the market demand and latest technologies, are scheduled for release in the near future with the earliest being in November this year.

UpsideLMS ’ recently released roadmap, which documents all releases in a phase wise manner, promises to take UpsideLMS a level higher while underlining its ‘It delivers more’ proposition. Some of the prominent features mapped for the upcoming releases include AVETMISS, Tin Can API Integration, and SCORM 2004 compliance.

AVETMISS, which stands for the Australian Vocational Education and Training Management Information Statistical Standard, is a national data standard that ensures consistent and accurate capturing and reporting of VET information about students. Its compliance is a key requirement for all RTOs in the Australian market for regulation purposes. UpsideLMS’ November 2013 release features AVETMISS compliance along with course URL masking, new email notification triggers etc.

UpsideLMS team has been closely watching and understanding the Tin Can API since its draft release. UpsideLMS’ February 2014 release will now come ready with the Tin Can API integrated. This will enable organisation to capture a multitude of learning experiences that their employees go through (and not necessarily just the eLearning ones), and ultimately, to link experience to performance. In addition to the Tin Can API integration, the early 2014 release will also feature the ability to create Learning Paths/Learning Plans, a complete new interface and set of functions for instructors, an intuitive and fresh new dashboard for line managers, to list a few.

The May 2014 release will include full SCORM 2004 compliance (the current version of UpsideLMS supports the basic SCORM 2004 compliance already) amongst other features like redesign of the very popular in‒built chat engine, more controls to administrators for social (user generated) content moderation and monitoring, features to enable and manage re-training (to manage time‒bound certifications and qualifications that need to be re‒trained on) through an improved competency management module.